What are the Effects of Age Bias Within English Grassroots Football? 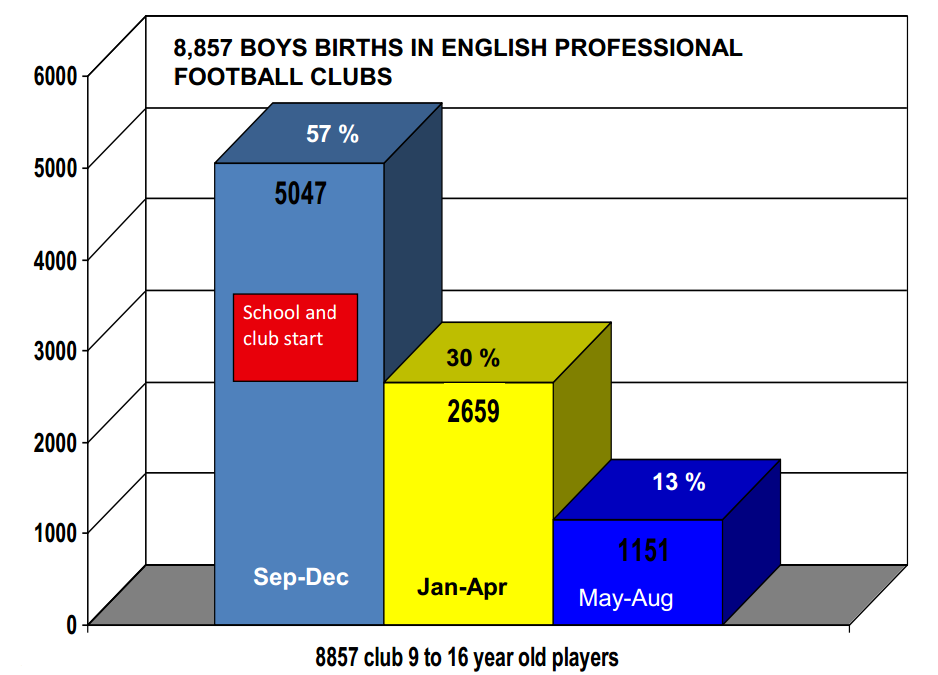 Following England’s premature exit from the World Cup, many have called into question the standard of English football compared to that of Continental Europe and South America.

One of the most popular emerging claims is that the European and Latin penchant for close quarters, intricate football developed at a young age through 5-a-side and futsal is the reason their players are so successful.

This is seen to be in contrast to the English grassroots overemphasis on stamina, physicality and aggression, which many believe has led to uninventive and unsuccessful football we have seen recently at international level.

If correct, RAE theory suggests that many younger players who despite having the requisite talent, are missing out on football careers simply because they don’t fit the bill physically; be they too short, slow or slight. 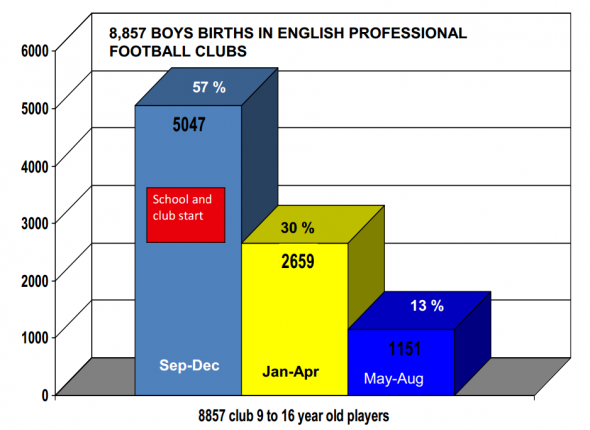 Graph taken from and accredited to a document created by @Darren6kelly

The theory then diverges between whether the age-related selection periods of the school year and football season are the problem, or whether it is the mind-set of those who do the selecting i.e. teachers, coaches and scouts.

The selection periods, when considered independently of the bias of those who do the selecting, have most of their effect because children born in the summer months are often pitted against children who in many cases have had almost a year of extra development. This of course means that players who would otherwise shine in a more fitting age bracket, are at a disadvantage from the outset; being potentially weaker, smaller, slower and by rights less experienced.

In terms of those who do the selecting, there are numerous manifestations of their biases. The first being mentioned above, in that they choose only the more physically developed children to play for their teams.

The second is that these more developed players will take their selection as a form of affirmation, which consolidates their self-belief and their desire to keep playing (even despite a lack of technical ability); perhaps no more evident than in the their disproportionate occupation of professional football.

This of course is not a particularly bad thing in itself, but its flipside and the third manifestation of selector bias is that those who weren’t picked are dealt a sometimes insurmountable knock-back, regardless of whether they were technically better than the bigger, stronger players or whether they would experience a growth spurt in the coming year.

In this respect many see the success of smaller players such as Messi, Neymar and Robben, who have dragged their respective international teams through to the quarter-finals of the World Cup (at the time of writing), as case-in-point that South America and Continental Europe are getting it right, choosing players based on raw talent and supporting them throughout their development.

So, a few proposals have been made in order to remedy this problem in England:

a)      Smaller grassroots pitches to emphasise the need for intricate skill rather than brute strength or stamina.

b)      The advent of futsal as opposed to ‘proper’ matches to sway the game in the favour of more skillful players.

c)       A push towards a change of outlook among teachers, coaches and scouts so they pick players because of their ability, irrespective of their physicality.

d)      Move the grassroots age selection to January-December so summer-born players are given chance to develop and have a greater likelihood of being chosen by those who still favour physicality.

Is RAE a problem in grassroots football? Let us know your thoughts on which proposals are most important for combating Relative Age Effect.