Part 1: Receiving The Ball On The Move 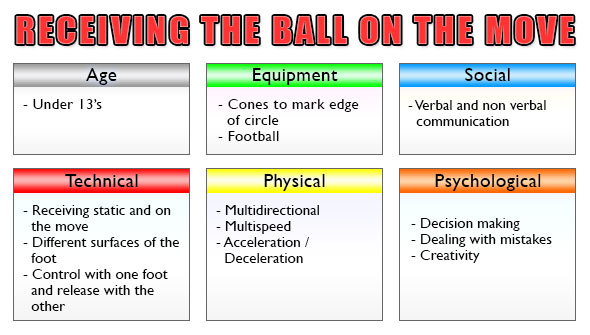 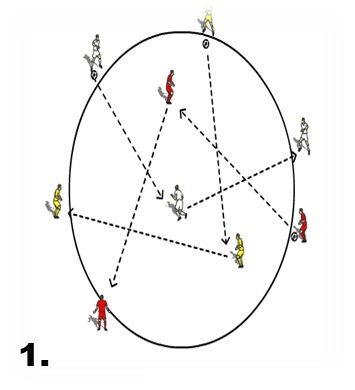 Make a circle as big or small as you want depending on the range of passing you are looking for. Use football bibs to identify  the 3 teams.

-Players work only in their colours.

-The outside players pass the ball to the team mate inside the circle.  They receive it and  lend it outside to the other player, and so on.

-Set the player in the middle a challenge of always trying to keep both team mates in his vision. 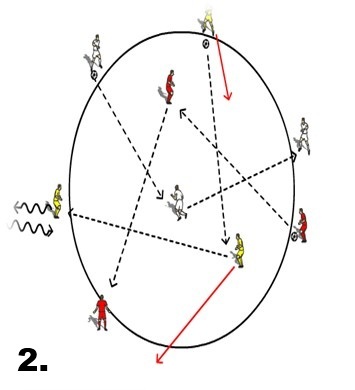 Same process as before except when the outside player receives the ball they have a choice.

1.Pass the ball back into the circle as normal.
2.Turn with the ball as on the diagram. If they decide to turn then the other two players swap.

-Set players a challenge of receiving with one foot ball and playing with the other. 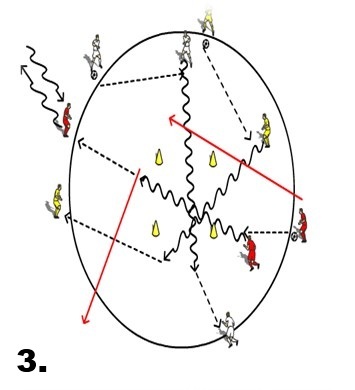 Add a square in the middle. Can players go through the square on their first touch. If there are player in the way (interference), do what you would do in a game, shift the ball and then travel through.

-Add a target player in the middle square.

-Reds and yellows continue with the same process trying to get through the square. They can dribble their selves or combine with the green player.

-If the defenders win the ball (whites), can they make 3 quick passes

Louis, just to say that your sessions are really good and very useful. Keep writing these amazing drills! And great luck for your career!