-Set up the area as above suiting the needs of your players. You can use our football bibs to split up your players.

-The white players then bends their run to either side of the 18 yard box.

-Whilst the white player makes their run, the yellow player plays a one two with the blue player and then produces a shot on target.

-Once the blue and yellow player have had their shots, they then enter the box to finish a cross from the white player. 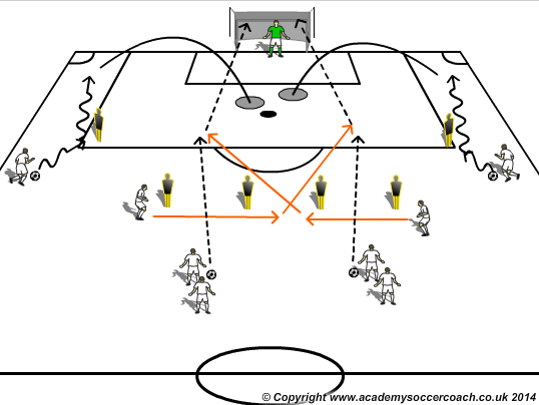 -Set up the area as above suiting the needs of your players.

-Both strikers take it in turns to run in behind for a one on one with the keeper.

-As soon as both one on ones are finished they then try and finish a cross from either side.

-Players can either move to the next part in the sequence or return to the same station.

-Deliver a variety of crosses.

-Change it to a diagonal pass and straight run. By Louis Lancaster in association with Discount Football Kits.