Risk or Retain Possession of the Ball

– A grid as big or as small as you like depending on age/ability.

-Two teams in the middle ready to compete.

-One team act as bouncers on the outside.

-The game is played for 3minutes.

-The whites and yellows have to keep possession of the ball.

-The team in possession can use the blues who can play off either one or two touches.

-For every pass a team make in the middle they get a point, so 6 consecutive passes equals 6 points.

-However if they pass to the blues on the outside , they keep possession but the number of passes reset to zero.

How you win the game:

-Team with the most consecutive passes in the 3minutes.They may get six and then lose possession. When they regain the ball they start from one. It is the highest score in a phase not all combined.

-If you make ten consecutive passes that team instantly wins the game. 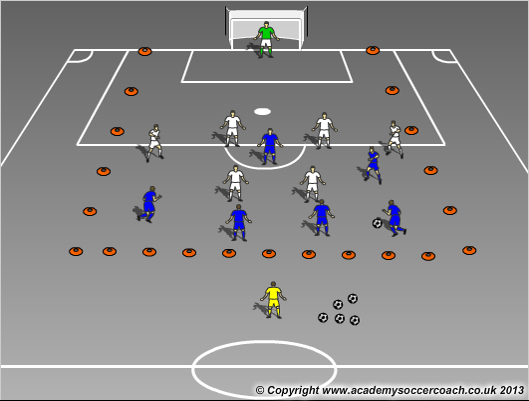 -Cone off the pitch as above.

-You can do this 2v2/3v3/7v7 use overloads/under loads it really doesn’t matter.

-Yellow server plays into the blues.

-The blues try and score a goal

-If the whites win the ball they must try and get it to the yellow server.

-During the play the blues can use the yellow player, but only once during each ball.

-This rules will force them to risk possession  and try passes of the outside of the foot around corners etc.

-Play for 3-5minutes and change over…or keep it the same and add your own rules.

-Change the size of the area.

-Add a floating player for the team in possession.

-Play in hands first like netball to get the decision making.

-Change the size of the area to suit the players needs.

-Allow the team in possession to use the yellow player 3times.

-If the whites hit the yellow player 3times then change over.

-Give individual challenges to players