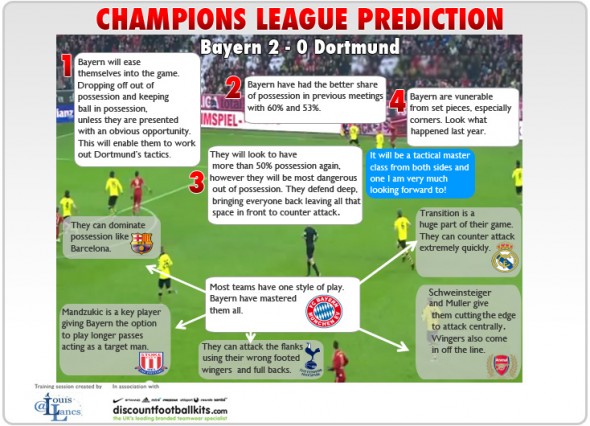 1. Bayern will ease themselves into the game. Dropping off out of possession and keeping ball in possession, unless they are presented with an obvious opportunity. This will enable them to work out Dortmund’s tactics.

2. Bayern have had the better share of possession in previous meetings with 60% and 53%.

3. They will look to have more than 50% possession again, however they will be most dangerous out of possession. They defend deep, bringing everyone back leaving all that space  in front to counter attack.

Most teams have one style of play. Bayern have mastered them all, they are able to resemble all the clubs below.

Mandzukic is a key player giving Bayern the option to play longer passes acting as a target man.

They can attack the flanks using their wrong footed wingers  and full backs.

Transition is a huge part of their game. They can counter attack extremely quickly.

Schweinstieger and Muller give them cutting edge to attack centrally. Wingers also come in off the line.

It will be tactical master class from both sides and one I am very much looking forward too!